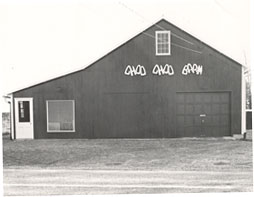 It all started well before 1961...actually, the Choo Choo Barn was originally born in 1945, in the basement of the Groff home on Franklin Street in Strasburg. George Groff had just returned from World War II, and was looking for a Christmas present for his two-year-old son Gary. He found a $12.50 Lionel train set, and, as any father would do, he helped his son set it up. One thing led to another, and, within a few years, that simple set had begun to take over a larger and larger portion of the family basement.

Word of this train display spread throughout the neighborhood. In the 1950's, the family began opening their now very elaborate display up for townspeople and local school groups during the Chrismas holidays. And, as the Groff family grew, so did their basement train display.

Then, in the early 60's, George and Florence needed some extra funds to help pay for college. George noticed a small township maintenance facility -- actually, more like a barn -- that became available along Route 741, just to the west of the recently reopened Strasburg Rail Road. Perhaps the trains, scenery, buildings, and animated figures in their basement could be used as a part-time business to help with the added financial burden of college expenses. And the rest, as they say, is history. 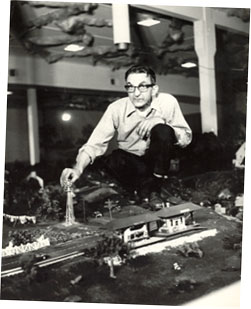 The Choo Choo Barn, as George decided to call his display, opened on Thanksgiving Day in 1961, and was very quickly a hit with local folks and visitors alike. With over 600 square feet of detailed landscaping, 6 trains, and 6 animated figures, people knew they were seeing something special and unique!

Over the next few years, the display continued to grow, as George added something new each year. In time, his children began to help out, from collecting tickets to adding their own ideas to the growing display. A gift shop was added to the front of the building, and a picnic grove was constructed to the west of the parking lot (free tickets to the grove were available to all Barn visitors). And the display continued to grow...

When the elder Groffs retired in 1979, their youngest son Thomas, and his wife Linda, became the new owners, builders, and operators of the Choo Choo Barn. In 1983, the second generation business owners opened the Strasburg Train Shop, a model train hobby shop catering to the "layout builder". Tom says that "detail and originality are what has contributed to the Choo Choo Barn's success and popularity, and other modelers should be able to purchase the same items that are used in the layout." Due to this credo, their train shop has become known far and wide as the place to locate "oddball" things such as garbage cans and the like. 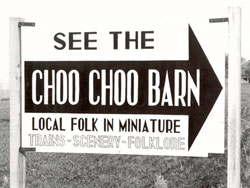 In 1989, Tom & Linda expanded the Choo Choo Barn into a complex of specialty shops, known as the Shops of Traintown, designed to appeal to everyone. The Groffs opened Railroad Books And Videos, which carries over 600 different books and video tapes devoted to both model railroading and to real trains, along with novelty items, t-shirts, glasses, signs, posters and many other items, all with a train motif. Railroad Books & Videos is also home to a very extensive collection of used trains. Many visitors have commented about being able to find the train they played with when they were young in our cases!

In 1993, the list of specialty shops grew with the addition of Thomas' Trackside Station, an officially licensed "Thomas The Tank Engine & Friends™" store. This store is made doubly unique by being the only 100% Thomas store in the United States. Over 1200 different items are featured, all involving the little blue engine from the Island of Sodor, and all his friends. Unfortunately, econonomic and other factors forced the Groffs to close both Railroad Books and Videos and Thomas' Trackside Station in April 2013.

The Shops Of Traintown are also home to Uncle Leroy's Ice Cream and Candy Kitchen and Isaac's Famous Grilled Sandwiches. And the picnic grove is still here, but you don't need a ticket any more!

A lot has changed since the days in the Groff family basement. This train layout has grown into an attraction for all ages and all groups...you don't need to be a model railroading enthusiast to enjoy the scenery and animations presented on this display. The display continues to re-open each spring, and Tom Groff and his talented team continue to add, update, clean, renovate, and restore the display, so there's something new to see every year.

Love trains? So do we!

Whether you are looking to get started in this wonderful hobby or add to your existing model railroad empire, we have thousands of items to turn your dreams into reality! Specializing in detail parts and scenery.

Take home a piece of our amazing train layout with the Choo Choo Barn DVD! Includes "Behind the Scenes" footage of updates and additions.

Our Annual Pass pays for itself in just over two visits - yet you can use it for an entire year! Bring fun back to your family - there's always something new to see at the Choo Choo Barn! Annual passes make a great gift! Stop in or call to purchase.